Making it as a professional football player, at any level is an achievement, There is some luck involved usually, but the majority of players will have had to work extremely hard. It does annoy me when fans call players useless, however it also annoys me when we call players world class (meaning the best), who are obviously not. So I have added a category, to differentiate players. I wont be getting into a debate on who is legendary or not, its my opinion and you will have your own.

Gazza was at one time probably the most entertaining player in the world, a rarity in the English game, as he could run with the ball, like those foreign players we imagine are always better than ours. A delight to watch, entertaining crowds in England, Italy and Scotland as well as the paparazzi.  For in my opinion the only other truly legendary player we have had since then is another Paul. Scholes was a different type of player, great vision, fantastic passing, even Iniesta and Xavi  looked up to him.

There has only been a few from the UK who had that amazing ability to run rings around players. Stanley Matthews, John Barnes, George Best, Jimmy Johnstone, Eddie Gray (when he was fit), you could include Waddle in that list and it would not be right to miss out Giggs. Since then though nothing from England, Gazza himself said, there has been no better English player than him since. I agree. Famed for antics off the ball, its only what he did with the ball I am interested in here. There have been many better professionals than Gazza since and before, but the topic here is running with the ball.

WATCH HOW GAZZA USES BOTH FEET, CUTS THROUGH PLAYERS WITH FEINTS AND USES HIS ARMS TO KEEP DEFENDERS AWAY FROM THE BALL. 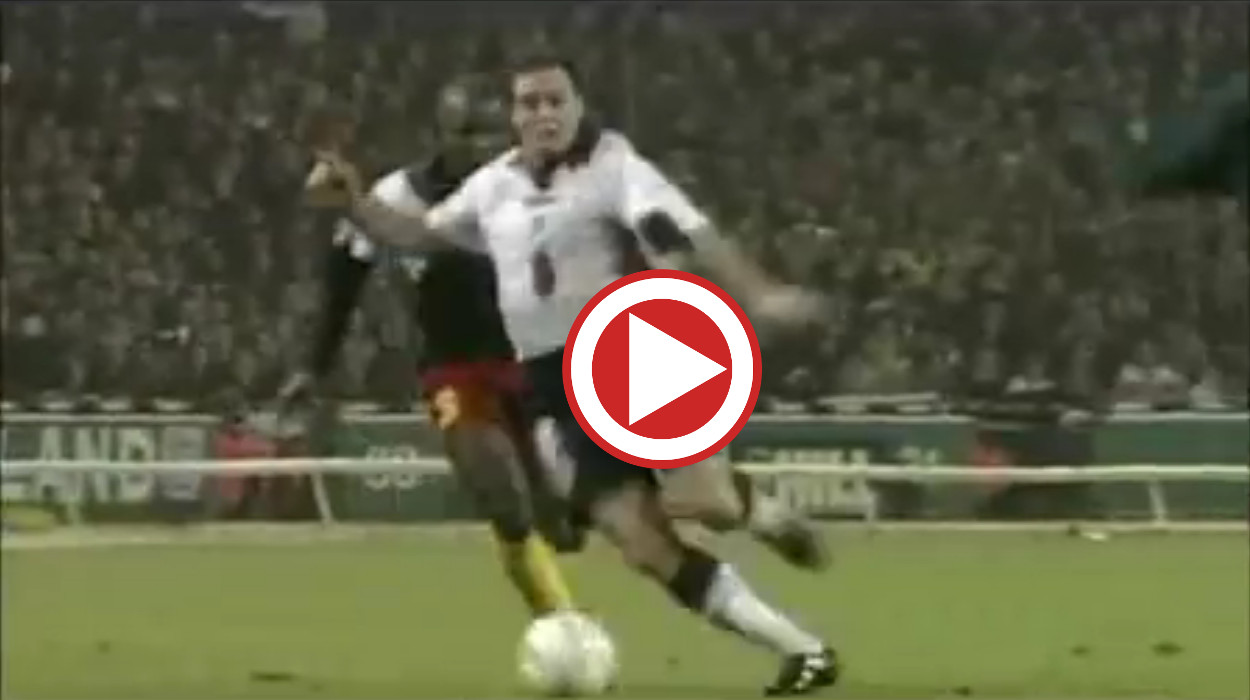 All the players I listed above are the result of street, playground and park football. Many of the players from yesteryear were two footed, unlike many of today.

"I just did what I did when I was younger, using all those skills I learnt when I was a kid."  Gazza

GAZZAS ABILITY TO RUN WITH THE BALL COULD BE THE FOCAL POINT OF ENGLANDS NEW GAME STYLE.

I should make it clear I do not think Gazza is the best ever at running with the ball, Brazilian Ronaldo (video below), Messi are two that are better, however he is English and WE NEED TO EMBRACE those few who have risen above the norm, for Gazza was no ordinary player. Young children will not know the name, but they should, until we start to produce these players again, we have know one to look up to. Matthews is well before my time, however we all know of his legendary status, playing until 50. Problem with many of the old greats, is the lack of film footage, Gazza was well documented and the film here proves his greatness.

For all his troubles off the pitch, we should put that to one side and show our future players how to play like a Gazza. Some say you cant teach that and to some extent that is right, you can not get every player to be a Gazza, Messi etc, but you can and should show them how to run with the ball properly from the earliest ages.

Kids football coaching must include this skill at every session, including sessions on passing, defending and even goal keepers should include running with the ball. The game should be taught by coaches that want to entertain, not just teach. If we all had this in our sessions then maybe a Gazza would not be so rare.

The game here and abroad is all about passing. Only a few places really embrace the dribbler. Argentina, Brazil are the two cultures that love the flambouyant players, its in their culture and we need to take this on and think differently. Trouble here and in many other countries, we only take to the dribbler when they can do it a high level, we dont want to take risks with them in the early stages of their career, as results are so important to too many coaches. The pass it brigade at every youth match need to be educated. GOOD LUCK WITH THAT!

Football For The Brave

We need to be Brave as coaches, as John Cartwright said in his book.
It is mediocrity that is killing our game, every time a player such as Wilshere comes to fruition, they are lauded as world class, when in reality many turn out to be good pros or under achievers.

Culture is important, we need a rethink, educating coaches and parents is required and a rethink of our coaching manual is needed if we are going to have these type of players again. Who since Gazza from the UK, has been so entertaining, Giggs being the nearest and yes Giggs was far more successful than Gascoigne and is a legend of the game, but for sheer brilliance running with the ball, Paul Gascoigne was better.

Gazza was a clear product of street football, his runs are fast, quick feet, not full of tricks, just subtle movements of the body to throw a defender off balance. What I love about Gazza is he could beat players for fun without being the quickest player. His ability to play in the future, spotting gaps and switching feet is all he required to mesmorize the players around him. He was not slow, but certainly not the quickest. He more than made up through speed of thought, quick feet and game understanding. Gazzas youth was spent playing hours and hours of park football, he had talent, but all talent will do is give you a head start, no one can reach greatness without the hard work being put in. Something maybe we dont give him credit for, we just imagine him fooling around.

Messi and Ronaldo are probably the best I have ever seen.

Coaching kids to run with the ball

A football team is made up of individuals. Those individuals have to learn to play with skill and creativity whilst learning about time and space. Gradually combining with team mates is added and passing is now combined with individualism. they are not seperated, individualsim and realism must be the foundation all the future work is built on. Children should be encouraged to run with the ball across players, not at them, keeping the ball close to their feet and keepng the ball on the safe side, is a key skill that Gazza used to keep the ball. The skill to run with the ball using both feet is possibly the most exciting to watch in football.

Our London Football academy, has recently opened and we work with players from 8 years old, it is obvious that nearly all the young players out their are not taught to run with the ball effectively. We have to encourage them to keep the ball, run across players or drag defenders acrosss the pitch and then cut back into that space they have just created. We play in tight areas, constant movement is required with and without the ball.  I have seen in just a few hours, small similarities to a Gazza.

Instead coaches are concentrating on technique without interference. So much time is being spent on different tricks, when the best way to beat players is through a feint, whilst running across players. Messi does this all the time.

Practice Play Level 2 video. Notice how the young players are being coached to run with the ball. 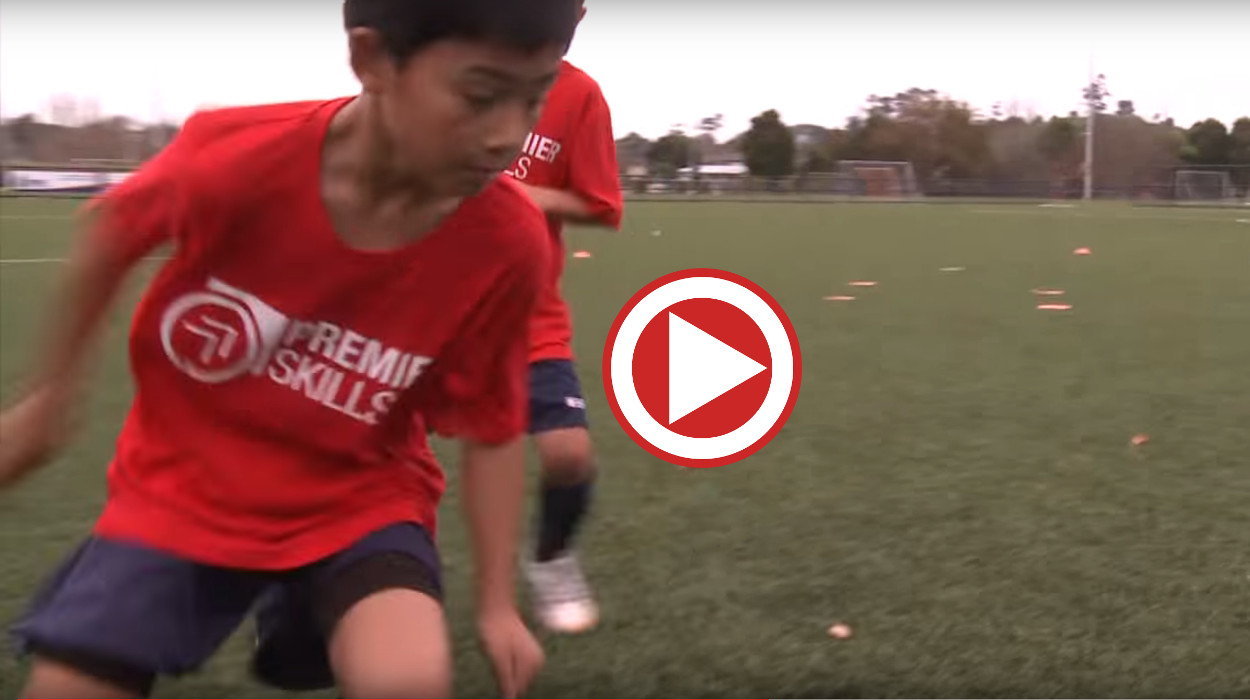 When Premier Skills run football training for kids, our work involves realistic practices, that combine individualism and team play, whilst working towards our style of play.

Messi, Ronaldo, Paul Gascoigne make the game exciting to watch. Paul was the last English player to actually make me want to watch him, above everyone else in the world.

Teaching Children To Be Ordinary.

English football culture is that of get rid of the ball, parents rarely ask their child to beat players with the ball. Inadvertantly the parents are actually saying, dont be different, blend in with everyone else. At the same time those children who can run with the ball, win matches for the team. Other players will tell you who is the best in the team and is it ever the goal keeper or the defender, rarely is it anyone who can not move the ball.

Parents stop complaining about those greedy kids, they will be the ones who improve quickest.

It does not matter what level you play at, if you can run with the ball you will find the game more rewarding, Encourage all children to have a go at being creative, its not about being the best or getting scouted, its to make them better players that will get more out of the game. If we took this attitude with us to all youth games then maybe we would start to see some serious talent emerge from this small Island once again.